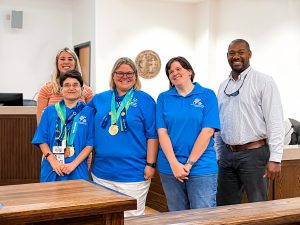 “We are proud of our athletes for having the courage and determination to compete in the Bocce competitions on both state and national levels,” said Director of Parks and Recreation Aaron Perkins. “We are thankful to the Board of Commissioners for recognizing their hard work and accomplishments.”

During the fall season of 2019, Katie, Jill, and Ashley competed in Bocce competitions at the 2019 Special Olympics North Carolina Fall Tournament in Charlotte, NC. Both Katie and Jill earned a gold medal at the state tournament and Ashley earned a bronze medal, which qualified them to be considered for the Bocce team that would represent North Carolina in the 2022 Special Olympics USA Games.

The 2022 Special Olympics USA Games took place June 5-12, 2022, in Orlando, FL. While Ashley, Katie, and Jill were in Florida, they competed in several Bocce competitions including Bocce singles, doubles, and team competitions. The North Carolina Bocce team finished in 4th place. Jill and Katie earned a bronze medal during their Bocce doubles competition, and Ashley and Katie won a gold medal in their Bocce singles matches.

“Since the beginning of this year, I have watched Katie, Jill, and Ashley put in a tremendous amount of effort in their sport,” said Special Populations Program Coordinator Alyssa Coln. “Their efforts were reflected through their USA Games results that they brought back to Brunswick County. I am proud of each lady for going out there and giving it their best, and I look forward to seeing them return to Bocce practice this September.”

Being one of the most popular sports in Special Olympics, Bocce features the widest variety of athletes in the Special Olympics USA Games. The Bocce competitions in the 2022 Games consisted of over 300 athletes and offered strategic events such as singles, doubles, team, and Unified competitions.

“All three of our athletes put in many hours of practice leading up to the USA Games,” said Director Perkins. “Our athletes did a great job of not only representing Team NC at the USA Games, but Brunswick County as well.”

More than 5,500 athletes and coaches from all 50 states and the Caribbean, along with 125,000 spectators, were united during the 2022 Special Olympics USA Games.

You can follow Brunswick County Parks and Recreation on Facebook and Twitter, and visit brunswickcountync.gov/parks-recreation to learn more about events and tournaments supported by the department.

Founded in 1968, the Special Olympics strives to create a better world by fostering the acceptance and inclusion of all people. Special Olympics provides year-round training and competition in a variety of Olympic-type sports for children and adults with intellectual disabilities. Through the power of sports, they are given continual opportunities to develop physical fitness, demonstrate courage, experience joy, and participate in a sharing of gifts, skills, and friendships with their families, other Special Olympics athletes, and the community. Learn more at specialolympics.org

For media inquiries, contact the Communications Director at 910.253.2995 or email meagan.kascsak@brunswickcountync.gov