Brunswick County is urging individuals to visit our website and to call or email county departments for assistance first before visiting county offices. The County now requires appointments for in-person visits. Not sure who to contact? Call our main line and we can help direct your calls.

The County has information and resources for individuals, businesses and municipalities that need assistance via the follow webpages: 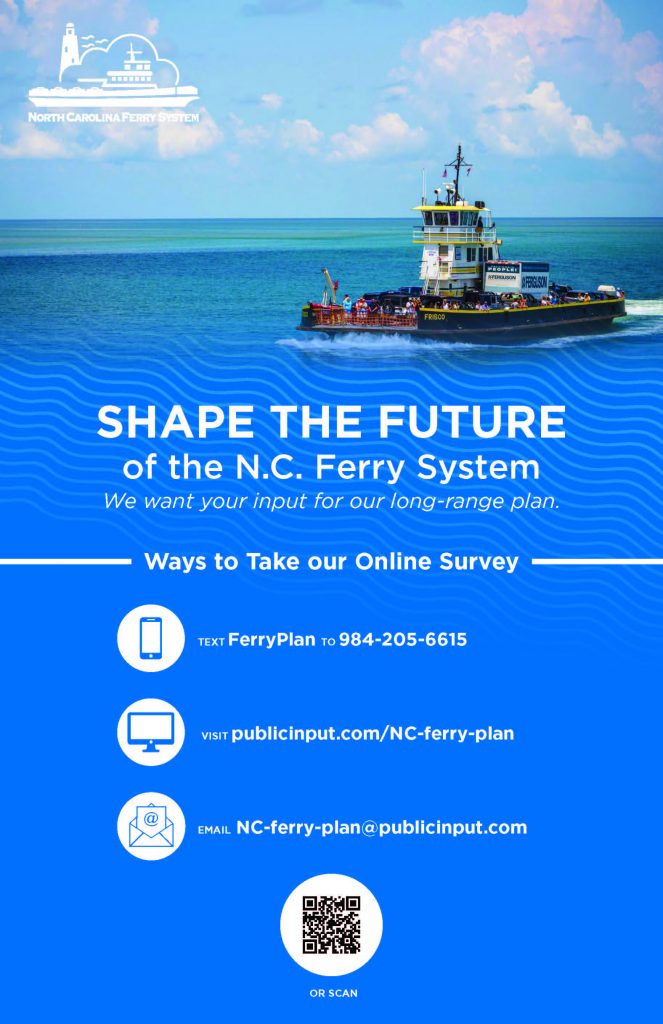 The North Carolina Ferry System is developing a Long-Range Plan that will chart a course for sustainability and success.  This plan will look 30 years into the future and help craft a vision for the system.  It will make re commendations for vessel modernization, additions to the fleet and maintenance scheduling.  It will consider how the system can better meet the needs of customers, as well as the region’s residents, communities, businesses and visitors, using new tools, new technology and new ideas.

The North Carolina Department of Transportation’s Ferry Division is the second largest state-run ferry system in the United States.  Around 800,000 vehicles, or approximately 2 million passengers cross the river and sounds of Eastern North Carolina on the ferry system each year.  The ferry system is an economic engine for the region, especially critical in developing the tourism industry, which contributes billions to the local economy each year.  It is truly the state’s marine highway, connecting residents with jobs, health care, schools and other services.

The ferry system also plays a crucial role during coastal emergencies, moving thousands of people out of harm’s way in advance of hurricanes. An emergency route also runs between Stumpy Point and Rodanthe, when N.C. 12 is damaged due to storms and other issues.

Ferry operations involve 22 ferries on seven regular routes across the Currituck and Pamlico sounds as well as the Cape Fear, Neuse and Pamlico rivers. This summer, passenger ferry service is also being provided between Ocracoke and Hatteras. Two routes – Hatteras-Ocracoke and Ocracoke Cedar Island – are officially part of the Outer Banks National Scenic Byway. The Division owns 12 ferry terminals in support of its routes, along with a support fleet that includes a dredge, crane barge, four tugs and three barges. A state-owned shipyard and three field maintenance shops are also integral to the ferry operations.

Please assist us in developing our long-range plan by answering a few questions on the survey at https://publicinput.com/NC-ferry-plan#

Following these questions are individual surveys for residents and for visitors/seasonal residents.