Brunswick County began an extensive testing program for PFAS contaminants when academic studies revealed the presence of multiple PFAS in its drinking water, testing a suite of PFAS contaminants on a weekly basis. Brunswick County’s water samples have continuously remained below the EPA’s established health advisory levels for PFOA + PFOS and the North Carolina Department of Health and Human Services’ established provisional health goal for GenX, however the combined levels of all PFAS is concerning and the County continues to test and monitor for most known PFAS compounds and GenX during its routine testing.

At this time, the EPA does not have an established health goal for several of the other compounds listed in this report that are contributing to the overall 185.9 ppt sample level, however the PFOA + PFOS and GenX sample levels in this report are also below the provisional health goals mentioned above. Due to the fact that little or no study has been done on the health effects of combined PFAS or many of these individual PFAS found in the source water, Brunswick County has taken a proactive approach to install the most protective water treatment system at the Northwest Water Treatment Plant to remove these contaminants.

Brunswick County’s leadership recognizes that high quality water is of paramount importance to our customers and residents and agree that reverse osmosis is the most effective PFAS removal technology, which is why the Board of Commissioners and county administration are embarking on a project to install an advanced low-pressure reverse osmosis treatment system at the Northwest Water Treatment Plant, as well as increase capacity at the plant to support the county’s growth. Brunswick County Public Utilities has been working diligently with engineers at CDM-Smith and the North Carolina Department of Environmental Quality to design, permit and build an economical low-pressure reverse osmosis system at the plant for the benefit of all Brunswick County water users.

Not only do pilot studies indicate that low-pressure reverse osmosis is the most effective advanced treatment method for PFAS removal, but they also indicate that it is the most economical advanced treatment option for the removal of high percentages of PFAS at the Northwest Water Treatment Plant. Most previous studies focus on the high-energy cost when using reverse osmosis for the treatment of saline or brackish water, but the cost is considerably less when used to treat fresh water for PFAS contaminants, especially short-chain PFAS.

All of the County’s water sample test reports are available to the public at https://www.brunswickcountync.gov/genx/

Brunswick County would notify customers and residents should any of its test samples exceed the health advisory levels established for PFOA + PFOS or GenX. 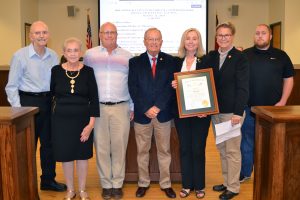 Retiring Brunswick County Manager Ann Hardy (third from right) received the Order of the Long Leaf Pine award, the highest award for state service granted by the Office of the Governor, at the beginning of the Brunswick County Board of Commissioners meeting on Monday, Oct. 21, 2019. State Representatives Deb Butler (second from right) and Frank Iler (fourth from right) jointly presented the certificate to County Manager Hardy with her family. Download photos.

BOLIVIA, N.C. – Retiring Brunswick County Manager Ann Hardy received the Order of the Long Leaf Pine award, the highest award for state service granted by the Office of the Governor, at the beginning of the Brunswick County Board of Commissioners meeting on Monday, Oct. 21, 2019. Signed by Governor Roy Cooper, the certificate was jointly presented by State Representatives Deb Butler and Frank Iler, whose districts encompass all of Brunswick County.

“I offer my congratulations to Ann Hardy on an exemplary career of public service to her community,” said Rep. Butler. “On behalf of Governor Roy Cooper, it is my pleasure to present her with the Order of the Long Leaf Pine, the highest award given by the State of North Carolina to those whose exceptional accomplishments enrich us all and make us proud to call North Carolina home. Ann Hardy is deserving of this prestigious award and a grateful North Carolina wishes her well in her next endeavor.”

“I’ve worked with Ann Hardy throughout her tenure as Brunswick County’s manager, and she has been a godsend to our county,” said Rep. Iler. “I often called on Ann for insight into how proposed legislation would impact Brunswick County, and she was always responsive, knowledgeable and thorough in getting me the information I needed. I will miss working with Ann and wish her well in her next phase of life.”

“I’ve always believed every citizen should sacrifice some of their time and energy to serve their community and give back in some way,” said Senator Bill Rabon, who was unable to attend the event due to a prior legislative commitment in Raleigh. “But every once in a while, someone comes along who believes so deeply in the cause of public service that they dedicate themselves to improving their communities full-time. Ann Hardy is one of those special people, and the people of Brunswick County owe her an immeasurable debt of gratitude for her years of service. Ann, on behalf of myself, our county and the people of the state’s 8th Senate District—thank you.”

“Ann Hardy has served as Brunswick County’s manager for nearly all of my tenure as a Commissioner, and I can unequivocally state that our county and state are a better place because of her leadership and service,” said Frank Williams, Chairman of the Brunswick County Board of Commissioners. “Both prior to and during her tenure as our manager, Ann Hardy has demonstrated unwavering integrity, a relentless commitment to excellence, and a laser focus on ensuring that our government is doing the right thing for its citizens. She is a tireless worker who has led by example and demonstrated a willingness to implement innovative solutions to ensure that our government functions effectively and efficiently. I can think of no one more deserving of this honor.”

Since 1963, North Carolina’s governors have reserved their highest honor, the Order of the Long Leaf Pine award, for persons who have made significant contributions to the state and their communities through their exemplary service and exceptional accomplishments. Persons named to the Order become North Carolina “Ambassadors” with their names and award dates recorded on a roster maintained by The Order of the Long Leaf Pine Society. They may then enroll in the society’s directory and become Society “Honorees” entitled to display society insignia. For more information, visit https://longleafpinesociety.org.

Ann Blackburn Hardy has served as Brunswick County Manager since May 20, 2013. She previously served as Director of Fiscal Operations for Brunswick County Government, Assistant Superintendent of Finance and Public Information for Brunswick County Schools, Finance Officer for Brunswick County Schools and as an Internal Auditor, Accounting Supervisor and Interim Finance Officer for New Hanover County Schools. Hardy was named the Local Government Manager of the Year by the Cape Fear Council of Governments in 2015 and Alumnus of the Year by the UNC Wilmington MPA Program in 2014. Hardy holds a master’s degree in Public Administration from UNC Wilmington, where she received both an academic scholarship and the Ray Dawson Award for academic achievement from UNCW MPA faculty as a graduating student. She earned a bachelor’s degree in Economics–Management from Salem College. She attended North Carolina State University for the coursework leading to her licensure as a Certified Public Accountant.

Under her leadership, Brunswick County’s Finance Department won the Government Finance Officers of America Award for Excellence in Financial Reporting 1997 through 2012 and the Government Finance Officers of America Award for Meritorious Budget Presentation from 2004 through 2012. Brunswick County’s Finance Department has continued to earn these awards each year since Hardy was promoted to County Manager in 2013. Hardy also received the Association of School Business Officials Certificate of Excellence in Financial Reporting from 1997 through 2003, the N.C. State Board of Education Recognition of Achievement in Financial Resource Management from 1999 through 2003, and the N.C. State Treasurer Honorable Mention Award for Governmental Accounting and Financial Management in 1998 and 2004. Hardy and her husband of 40 years, Steve, live in Winding River Plantation. They have two adult children, Tyler and Ashley.