The County has information and resources for individuals, businesses and municipalities that need assistance via the follow webpages:

Subscribe to email updates from Brunswick County or our engineering firm CDM Smith about issues concerning PFAS, GenX, water quality, and the Northwest Water Treatment Plant project. Click the links below to sign up.

How will BCPU ensure the water is safe once Low Pressure Reverse Osmosis is implemented?

What do we know about GENX?

What is a contaminant?

What is the difference in PFOA (C8) and GENX?

What are these chemicals used for?

When did Brunswick County learn about GENX?

How is GenX measured?

What health guidelines or regulatory limits are available?

What is a Lifetime Health Advisory?

Who benefits from the lawsuit that Brunswick County filed against Chemours and DuPont?

Why did Brunswick County file a lawsuit against Chemours and DuPont?

What steps can I take at home? Is there a home filtration system that will remove GenX?

Will boiling my water remove Genx?

What about reverse osmosis?

Should I drink bottled or distilled water?

Will there be bottled water provided?

With GENX in the Cape Fear River, what can/will Brunswick County do to ensure the water is safe?

Does BCPU monitor for GENX?

Why do the test results from the week of July 3 show more GenX in the treated water than in the raw?

Has Brunswick County tested for or found any similar substances?

Is Brunswick County doing anything about 1,4-Dioxane?

Is Brunswick County looking into cancer rates in our area, or a connection between cancer rates and chemicals in our water?

Can customers put a filter on their tap to remove GENX?

What is being done about this situation?

On June 15, Brunswick County Commissioners Chairman Frank Williams, County Manager Ann Hardy and Health and Human Services Executive Director David Stanley met with officials from Chemours and local and state agencies. At this meeting, Chemours officials stated that the GenX compound found in the Cape Fear River was likely a byproduct of another manufacturing process at the same location, and not due to discharge from the plant making GenX.

After the meeting, Brunswick County officials joined other local officials in asking Chemours to cease discharge of GenX into the Cape Fear River immediately, while regulatory authorities make a determination of the chemical. The Chairman’s notes from the meeting and video of the press conference held after are available at www.brunswickcountync.gov/genx.

At the June 19 regular Board of Commissioners meeting, the Board passed a resolution requesting that Chemours halt any process resulting in discharge of GenX into the Cape Fear River and approved funding for a consultant to provide specialized technical assistance.

NCDEQ and NC DHHS are leading a state investigation into the presence of GenX in the Cape Fear River, and are pushing Chemours to limit the amount of GenX being released into the river. NCDEQ is collecting water samples and sending them to a laboratory in Colorado which is capable of detecting GenX at low concentrations.

Will Rep. Rouzer be involved?

Is a map available showing locations within the Brunswick County service area that receives source water from the Cape Fear River?

FAQs about the EWG January 2020 Report

FAQs about the EWG January 2020 Report

Letters to NCDEQ & Resolutions Regarding Chemours

Letters submitted to the North Carolina Department of Environmental Quality:

END_OF_DOCUMENT_TOKEN_TO_BE_REPLACED

Design for the upgrade and expansion of the Brunswick County Northwest Water Treatment Plant has reached a significant milestone marked by delivery of 60% construction documents. These documents contain details necessary for a contractor to expand and upgrade the...

For more information from Brunswick County’s partners and other resources, click the links below.

Troubled Waters: The Fight Against PFAS 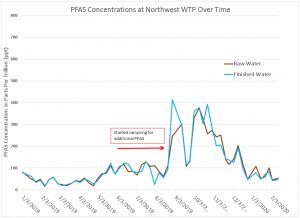 Brunswick County now requires individuals to first visit our website for services and to contact county departments via phone or email to see if we can assist you virtually to support social distancing for our residents and team members during the COVID-19 pandemic.

If an in-person visit to a county office is necessary, you will need to schedule an appointment first via the phone and/or email listed.